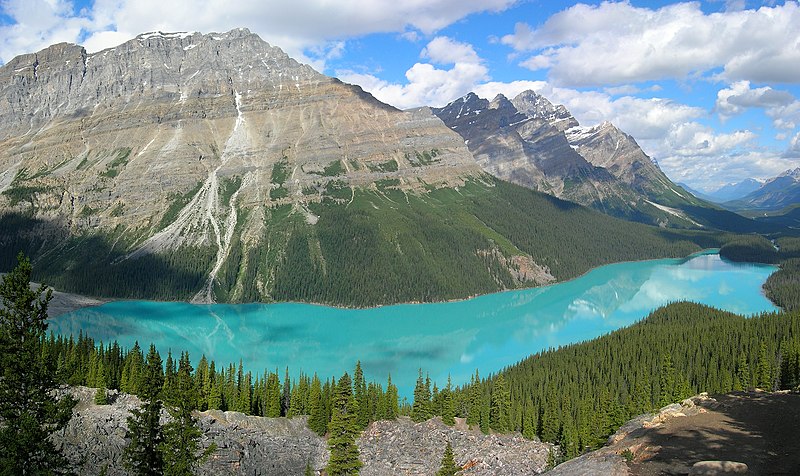 Bonjour and welcome to the Espérer Pack, The Pack of Hope. This is a semi-realistic wolf role-play pack based in beautiful landscape, and raw nature of Canada. To their knowledge, the Espérer's home ranges across a mountainous region, and is the only known wolf pack existing here. It’s not easy, there are many dangerous predators, tough weather, limited food supplies, and rough terrain to climb daily. Here, we embrace the positive times, and fight through the negative times. To be a member of the Espérer means to hope, the hope of survival. Come, join us, have fun, and let your creativity soar!

This pack welcomes both beginners and experienced role players. It can be fluid, but there is also an option to plan your role-play before hand. We even accept wolves, considered as free wolves, who aren’t associated members of the pack, and can roam freely around. We recently underwent a few changes after a short hiatus, but are back and running.


Pack Motto: For every low valley ends, and the land eventually goes back upwards.

II. Your characters have to be a species of wolf. Please no dog breeds, or manned wolves.

III. Please keep your wolves appearance realistic, no purple coats or wings on your wolf.

“Chef” | The Alpha
The Alpha is the leader of the pack, and sets up rules, and celebrations for the pack. Daily responsibilities include checking in with other wolves, occasionally going on guard, training with warriors, and planning or hunting along with Head Hunter. Alpha is expected to be responsible individual.
∆ Avelti ∆


“Frère“ | The Beta
Second in Command, Brother to the Alpha, The Frère the second in command after the Alpha, is not the actual brother of the Alpha. The Beta is the Alpha’s right pawed wolf, giving advice, and knowledge. Daily responsibilities include checking in with other wolves, occasionally going on guard, training with warriors , and planning or hunting along with Head Hunter. The beta is expected to be responsible individual.
{Earned}


“Chasseur“ | The Head Hunter
One position held by one wolf, The Head Hunter is a very organized, intelligent, experienced wolf that plans hunts. Daily responsibilities include searching for prey, and hunting, and devising strategies. The Head Hunter reports to the Alpha.
Open

“Guerrier“ | The Warriors and Guards
Daily responsibilities include patrolling the pack territory, training, standing guard, reporting to the Lead Warrior, Beta, or Alpha. They protect the pack, and are strong, and stay up late to keep watch on the pack.
{Open}


“Explorateur” | The Explorer
While all wolves are encouraged to explore, as Explorers a wolf’s main responsibility includes exploring the land, discover new locations inside and outside the pack territory. Explorers face many struggles and dangers, and are responsible to report to the alpha and beta of their findings.
{Open}


“Aidez-moi“ | The Healers
Healers are wolves with intensive knowledge on herbs. They make remedies to help wolves with disease, infections, and heal wounds. Daily responsibilities include searching and collecting herbs to stock. Healers also hunt when called upon by the Head Hunter.
{Open}

“Se Soucier” | Pupsitter
An incredibly important position, pupsitters care and tend to young pups. Much is expected of them for they act as a role-model, and are the pups main teacher. Occasionally, the pup sitter sets up lessons with other adult wolves of the pack, to give lectures about their rank and explain their responsibilities to the pups. The pupsitter can if called by the Head Hunter, but may decline because of their responsibility to the pups.


“Jeune“ | Pups
Pups are young wolves. Pups are curious, playful, and are learning about how to be a wolf and what role they want to pursue in the pack.
{Open}
∆ Emory ∆
∆ Dilusia ∆

***All wolves of the pack act as hunters to help feed the pack. ***

Hunters:
All wolves serve as hunters, but for some it can be their main duty.

Please submit an application first, and once approved, please register on the site, and create your own biography. You may be as brief or as complex as you'd like to be in your application. Below is the form for applications.

History (Optional) : To be developed in RP if possible

by MasterWolfMJ
MeghanNeko you are accepted! Yes, you are absolutely allowed to develop your character's history in RolePlay.

You may register on the site, and create a biography of your character. Happy role-playing!

by Jay32
I really like this. Its simple but still has quite a lot to offer. ^^

Wolf Species: Grey Wolf
Wolf's Name: Quartz
Age: Approx. 3 years
Gender: Female
Desired Rank: Whatever you think would suit her best. c:
Appearance: Reference
Personality: Quartz remains on the thin line of an introvert and extrovert. She is one of little words and reserves her breath on concerns she finds little worth in. She isn't necessarily fond of expressing her thoughts and feelings towards others, preferring to keep them bottled to herself. She doesn't rely on her voice to publicize her emotions and instead allows her body language to speak for her. She attempts to keep her small temper at bay, but nevertheless she still has her exploding moments, letting out all of her emotions if she doesn't get a chance to vent them beforehand. If she were to stumble upon a conversation discussing a subject matter that interests her, she will be more than amenable to make her opinions regarding that matter public, if it was to only make others aware of her outlook. Whatever opinion someone else may publicize wouldn't usually affect Quartz, just as long as it doesn't interfere with her own opinions. She is a wolf of her words and will, despite how vital, keep a promise or a secret, regardless of who is it coming from. Quartz heavily strives on the mantra 'honesty is the best policy' and will halt at almost nothing to get a point across. (This is just a brief lil summary of her overall personality.)
History (Optional): Still in major development. Hope that's alright!

by MasterWolfMJ
Jay32 you are accepted!You may register on the site, and create a biography for your character.And no worries, it's absolutely alright to develop your character's history.

For Quartz's rank, I'll suggest two options. The first being, I think the best position would be the new rank, The Explorer, but being a Warrior or Guard could also suit her too.

The second option includes, I can create an additional rank, something similar to an apprentice or non-matriculated student. Your wolf wouldn't have to choose a rank, but instead participates in the different ranks daily activities, till she finds what position would best suit her.

I suggest you choose whichever option seems more interesting to you, so you can have more fun during role-play. Also, if you have any questions, always feel free to message me on Wolfquest, or on the pack's site. Happy role-playing!

by Jay32
I've given it some thought and I believe The Explorer rank would suit her just fine. Thank you for the acceptance!

by Paradiigm
Welcome to the pack. Jay!

EDIT: Also if you need moderator help let me know

by Paradiigm
Hope you get accepted! Will be awaiting your verdict!

by MasterWolfMJ
Chinuk you are accepted! You may register on the site, and create a biography for your character. Happy Roleplaying!

by Jay32
Welcome to the pack, Chinuk!

by Paradiigm
Welcome to the pack Chinuk!

Appearance: Yellow eyes with a light peach snout that travels down her neck to her belly and legs. Eyolf has a lighter shade of brown mixed with black to cover her back, upper neck and ears, she also has a strip of black fur traveling down her tail, tipping it in black.
Personality: Eyolf prefers to observe what happens around her choosing not to speak up if it doesn't concern the pack. Eyolf is passive and friendly to her pack and those she's accustomed with. She will voice how she feels if Eyolf believes it to negatively effect a member, and is untrustworthy towards outsiders. Eyolf has a knack to guide others and take charge if completely necessary preferring to stay in her lane. Eyolf feels more at home in quiet setting, letting her think clearly and concentrate on what is concerning her.

History (Optional) : Born in Texas to a pair of Mexican wolves Eyolf has traveled some distance on North America. She has mostly traveled alone building her love of the quiet life and grew to observe when hunting due to its roughness alone. Eyolf is quick on her feet but prefers to outsmart her prey than outrun even when she's faster. Eyolf has not fostered any pups nor truly had a pack rather a group of nomads who eventually split. Can be more developed in RP.

by Paradiigm
Nice application! Hopefully you get accepted!

by MasterWolfMJ
Looks great ReconBlaster! You are accepted as head hunter. Please register on the site, and create a biography. Happy Roleplaying!
All times are UTC-06:00
Page 1 of 3