Greetings Friend! Welcome to the Krodia Kingdom. We are a pack of high status and present ourselves with the high most importance. At least that's what we want you to think. We don't care about posture or good manners. We are a normal pack just like the rest. Except...We have Royalty in our pack. A Royal Family to be exact. We are a new pack and are seeking members for our pack. I hope you are willing to do just that.

Welcome,
to The Krodia Kingdom Pack.

~ Follow all Wolfquest rules.
~ Read and follow all forum rules before and during joining.
~ Respect all members of the pack.
~ You may only have one character as of right now though that my change in the future.
~ Please try to post at least every day or every other day.
~ We are a semi-literate pack so you must have at least 5 sentences in each roleplay post.
~ If you are going to be away for a long period of time, please notify a Royal Family Member, Admin.

All members of the Krodia Kingdom are listed here along with which rank their character is in and the description of the rank.

Royal Family
The Royal Family is pretty much the 'alphas' of the pack. There is a female and a male which are called the King and Queen of Krodia Kingdom. They make and enforce the rules and make the decisions for the pack. When one dies, they are succeeded by any living child but there is no children then either sibling, cousin, or aunt/uncle.
King: Tauko | Male | leaf12459 | Active
Queen: N/A

The Board
The Board is those who have proven themselves in their rank and are appointed the head of their rank by the Royal Family. They are the democracy of the pack. They take problems that they see in their ranks and report them to the other board members and the royal family. The board then decides how to fix it.
Head Healer: N/A
Head Knight: N/A
Head Gatherer: N/A

Healers
The healers are the wolves in the pack who heal wounds and injuries. They may be in this rank because they heal or are to provide wisdom, some both. If you are helpful, caring, or heal then you fit into this rank.
Rico Sheffard | Male | jay1997 | Active
Mitsuki | Female | Sushi | Active

Knights
Knights are the strongest wolves of the pack. They are fighters, warriors, and guards all rolled into one. They protect the pack and pups from dangers and often join the Gatherers on hunts.
Astralita | Female | IsabellaPurple8 | Active

Gatherers
Gatherers are the hunters of the pack. They provide food for the whole pack and are relied on very much. They are often the faster wolves though some who do not choose to become a Knight often falls into Gatherer.
Dahlia | Female | Kisabellablue8 | Active
Zusa | Female | Kyuubi96 | Active
Nova | Female | -Cimi | Active

Apprentices
Apprentices are the wolves of the pack from the age of 6 months to 1 year. They train to become a Gatherer, Knight, or Healer. Each apprentice will be taught to become a member of the rank they wish to become a part of.

Pups
Pups are the future of the pack. They are the wolves of the pack from birth to around 6 months. They are cared for by the whole pack and are cherished. They are protected at all costs and will train as an apprentice when they reach 6 months.

Peasants
Peasants are the wolves who have yet to join the pack or have joined but have yet to choose a specialty.

Wolfquest Name: jay1997
Wolf Name: Rico Sheffard
Age: 3 years
Gender: Male
Rank: Healer
Appearance: Rico is a tall and slender lad, with little muscle but a lot of height like a toothpick. He is mostly tri-toned, the top of his head and along his back being a dark chocolate brown, with a reddish brown face and sides. Under his jaw and along his belly and legs are creamy white. Rico's face is delicate and pointed, seemingly always carved in a stern expression around his two sandy brown eyes.
Personality: Rico is a serious and brilliant individual, always very focused on his craft and has no taste for funny business. He is straightforward and has a habit of looking down on others, as his talent in herbal medicine has swollen his ego and making him haughtier than most. It is hard to get into his good graces, as he is very antisocial, but once you do, the stern jerk exterior breaks away to reveal a quiet and caring individual. Showing kindness and sharing emotions easily gets the male flustered, and it quickly becomes obvious upon meeting him that his cold exterior is put up to protect a very fragile male underneath.
History: Still a work in progress, I hope that is alright. 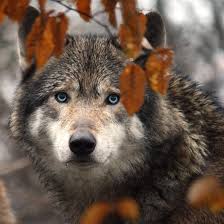 Wolfquest Name: IsabellaPurple8
Wolf Name: Astralita
Age: 3 years
Gender: Female
Rank: Knight
Appearance: Astralita is a slim long wolf. Her coat is light brown mostly but she has a tan fur on her face to the bottom of her stomach, and at the edge of her legs, she has white paws. She has bright glimmering blue eyes that stands out from her body.
Personality: Astralita is a very determined wolf. She always sets her eyes on the goal and never takes it away. Her personality shows that she likes to do things her own, but if your very close to her you might get into her small soft spot and you'll be involved. Try not to annoy her to much since she has a bit road rage. She may actually be very friendly and helpful when she is in a super good mood.
History: Back then, her mother died of a rare sickly disease and she was left with her abusive father. A week of her mother's death her heart grew hard. She tried leaving the pack but they refused. So, she went by the hard way. She lived by herself for a period of her life. She then went to join a pack and hid her past life behind her.
Top

Wolfquest Name: Kisabellablue8
Wolf Name:
Dahlia
Age:
2 years
Gender:
Female
Rank:
Gatherer
Appearance:
Dahlia is a petite grey wolf with amber eyes.People often get her confused with a apprentice.Her color is a soft light gray throughout with a light cream on her neck turning into a silver color on her muzzle.
Personality:
Dahlia is a friendly wolf who wouldn't mind being around a crowd.She actually depsises being alone.She is generous wolf who wouldn't mind dropping everything to help someone in need.
History:
Dahlia was born in a litter of two.She only had a brother who goes by the name Fortis.He was always bold dragging Dahlia in great trouble with the pack including sneaking out and getting lost.Dahlia never forgaved him for this and went on her way to find her pack.Fortis soon died of hunger letting Dahlia being alone at the age of 8 months.Dahlia found her pack territory to only see burnt down trees and bushes.She ran and soon found Krodia Kingdom. Sorry if you think that but, we are not the same person. It seems that way, that's what everyone thinks, we even got banned because of that incident
Top

Welcome to all the new members!

Also, I know you already know about this, Tauko, but just to make an official announcement for this pack: I am going to be gone from now until sometime between Tuesday/Thursday/sometime later this week. Sorry for the bad timing, what with us being brand new and all.

The pack is growing nicely! I can't wait for the rp to start.
Top

Wolfquest Name: Sushi (I'll be changing it soon)
Wolf Name: Mitsuki (AKA Suki)
Age: Around 2 years
Gender: Female
Rank: Healer or apprentice to be healer!
Appearance: She is a VERY small and petite! She is a lot smaller than all the others. She has a pure white coat with deep blue eyes that can change color from silver to green!
Personality: She is very sensitive and shy. She loves serving people and hate letting them down. She's usually clumsy and a nervous wreck but, she tries her best. She has trouble making friends causing of shyness and self-consciousness... She usually comes across as creepy or mysterious due to her inability to interact normally with others.
History: She was betrayed but other packs and or forced to flee. She had an injury in her right eye long ago from a rival. Though it has now healed. She was also the runt of her pack and is under-developed.
- - - - - - - - - - - - - - - - - - - - - - -
My life is useless,
And so am I.
I hate myself,
I want to die.
- - - - - - - - - - - - - - - - - - - - - - -
Top

Wolfquest Name: -Cimi
Wolf Name: Nova
Age: 2 1/2 years
Gender: Female
Rank: Gatherer
Appearance: Small white/cream colored female, pale blue eyes, long legs, built for running
Personality: Nova is quiet and reserved when you first meet her. When she gets use to you, she is a bundle of energy. She is determined, protective, and you can usually find her in a good mood. Unless you disturb her from her sleep, don't do that. Nova loves being around others despite being quiet at first. She can be stubborn and will probably never admit she is. She isn't afraid to voice her opinion, although she tries to stay as polite as she can be. Nova isn't one to turn to a fight but will if she feels threatened, or if her family is threatened.
History: Nova remembers her past being relatively easy. She always got along with her parents and she loved her siblings. Nova has always enjoyed hunting, especially when she joined her father and brothers. Her family is all still living and well, Nova just decided to go out on her own, along with her brother Aero. They traveled for a bit together, and finally seperated after a couple of weeks.
✦