Welcome Holly! Please register to pack site and do your bio when you can. Thanks

One more hunter will be accepted. This may change when protectors and other positions are more.

Wolf Reference: (image) (It is edited, so if Firefly is accepted she will put it in her bio)
Things can- and will- change,
But you cannot just sit by
And expect it to happen.

Wolf Reference: (image) (It is edited, so if StormShade is accepted she will put it in her bio)

Firefly, StormShade, you are accepted. Please finish your bios in the pack website.
Things can- and will- change,
But you cannot just sit by
And expect it to happen. Extra: Ember is searching for a pack at the moment
Last edited by Shaylyn on Thu Jun 02, 2016 2:24 pm, edited 1 time in total.
Things can- and will- change,
But you cannot just sit by
And expect it to happen.

OK see you in the site RP Ember!

Wolf Name: Lupus (hahaha how creative)
Wolf Gender: Male
Wolf Age: 2.5 years
Appearance: Greyish/Dark grey coat, yellow eyes, small scar on muzzle
Personality: Slightly strange (odd man out) in general, usually easygoing. A bit of a jokester, although, he can be fierce in some situations, especially in territorial disputes. Kinda explains why he got the scar.
Desired Rank: Alpha (if you can, but beta's fine too)
Desired Position: Protector
Can you apply to all of the pack's rules: Yup
Wolf Family: Echo (Father), Tundra (Mother), Blaze (Sister), Atlas (Brother)
Wolf History: Lupus was born to a rather small, but loving family. They got by mostly fine, until one winter, the last winter that they were together. You see, their territory was actually rather large for such a small pack, and coupled with the decreased amount of food, rival packs where starvation got to their head, and inability to guard the territory fully, their territory was quickly taken by a rival pack. His father and mother fought to the bitter end with Lupus and his siblings helping too (that's how he got the scar), although to no avail, they were no match for the 10-15 strong pack. After they died, Lupus and his siblings (now around 1 and a half years old) quickly booked it out of there into the bitter wilderness, and they haven't seen each other since. He does sometimes reminisce about the old times, though. sometimes wishing to reconnect with his siblings (if they're even still alive.)
Wolf Reference: ♥─ are you calling me a sinner?
av©lupinz
x
X
X 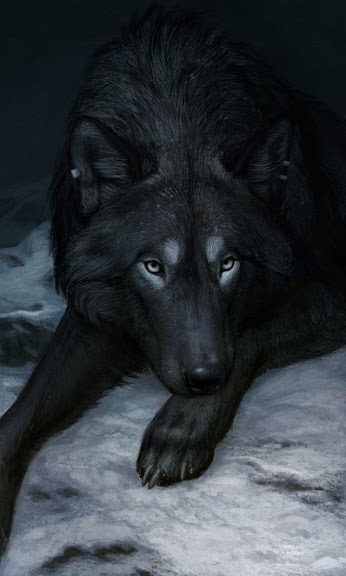 Wolf Name: Cyla
Wolf Gender: Female
Wolf Age: 3
Appearance: She is a pure black wolf, as if referred to as 'the dark queen'. The only light on her is the light grey above and below her eyes and her piercing light blue orbs. She's has a slender body, usually good for speed. Others may look down upon her small muscling and wonder why she is so devoted on being a protector. She is the average size for a she-wolf, though she acts much taller than she is.
Personality: ||Observant|| ||Prideful|| ||Dark humored|| ||Loyal to those that are worthy||
Desired Rank: Protector
Desired Position: Beta
Can you apply to all of the pack's rules: Yes
Wolf Family: *Chuckles* Now why would you want to know of them?
Wolf History: She doesn't talk much of her history. When she does, she is vague. All that she really tells is that she lived in a pack where her father was highly ranked and he pushed her to follow in his footsteps, making her how she is.
Last edited by Rogue_Vengence on Tue Jun 14, 2016 10:03 am, edited 1 time in total.
Can you hear the silence?
Can you see the dark?
Can you fix the broken?
Can you feel my heart?
Top