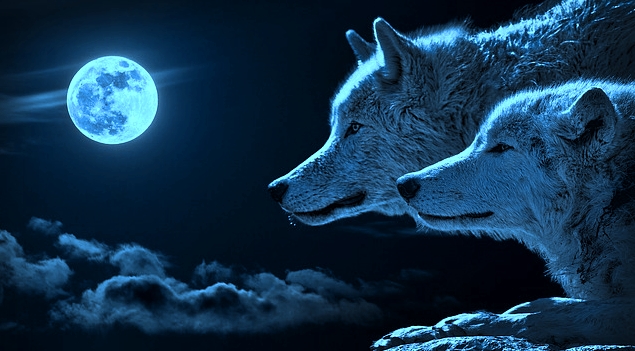 At the edges of Slough Creek, a dark wolf is walking with his four younger siblings, thinking about his past,
about the peaceful days he could play with his friends and family while enjoying the summer sun.
But those days ended when the mighty Alpha Pack attacked them and took over their territory.
Their pack were separated. It was at that time when winter broke, together with a deadly virus and hit his separated pack.
Only a few survived, and that was Derek and his four younger siblings.
He stared at the moon night after night, seeking help. But this night, the blue moon came up. His only choice was to leave the area and start over.
As he hears the Alpha Pack howling in the background, he looks back with his intimidating red eyes. He leaves in search of other nomad wolves, to rebuild his pack and return on the next blue moon and take his place as leader over his birth territory...


Will you join him or fight against him...?

Pack Rules
Be respectful to fellow members
Members must register to pack site
All members must have WolfQuest version 2.5 (to think about those who cannot get 2.7)
Follow all other WolfQuest rules
No giving away of pack passwords or any other information only meant for pack members
Enjoy the pack


Member Application (only those marked with * are needed, rest are optional)


Rival Application (there is a slot open for the mighty Alpha Pack, just insert pack name and leaders)


I will notify when pack meetings will be held.
Pack Name: Blue Moon Pack
Password: (I will PM members)
Pack Site: http://blue-moon-pack.freeforums.net/

Friends:
WOLVES OF THE NIGHT WATCH
led by:
Clara (Natalie_Elisabeth18) Wolf name: Storm
Gender: Female
Age of wolf: 5
Desired rank: Alpha or Beta (It don't matter to me which one you choose)
Desired position: Hunter or protector (It don't matter to me which one you choose)
Appearance: Black wolf with light gray cloud on chest and amber/yellow eyes.
Personality: Strong, Swift, Fast, Caring, Hates bears and coyotes, Can catch eagles in mid-air, Can be testy (Sometimes)
Wolf's history: Storm was 1 Year old when her parents where killed by wolves of the Shadow pack. She had gotten away from them carrying her 8 month old sister Sable. After Storm turned 3 Sable left and went to find a pack of her own, She joined the very pack that had killed her parents. Storm started looking for a pack of her own as well, she found this one hoping she would be accepted.
Can apply to all pack rules? Yes!
Wolf refrence: My cousin Jimmy always starts his trip to the emergency room with "Hey y'all! Watch this!"
Please join my pack called the Skypack or you can be an ｆｒｉｅｎｄ or e͟͡n̷̛͡èm̴̀y of the pack.
You can also join my other pack called the Wolf Guard.
signature © twinlinskis
Avatar by me
wolfquest.org/bb/viewtopic.php?f=27&t=79555
Top

You are accepted Storm! I'll put you up as an alpha Second in Command (Lead Hunter).

No thanks, I'll stick with protector.
Things can- and will- change,
But you cannot just sit by
And expect it to happen.

Wolf Name: Silver
*Wolf Gender: Female
*Wolf Age: 4 years
*Appearance: Silver stands at 32 inches she is rather larger then the female wolf should be. She has a silver grey shaggy coat but she keeps it well groomed. She has grey blue eyes. She has a scar of three claw marks that start above her right eye going down her face and should down her leg and ending at her claws.
*Personality: Silver is nice and mean at the same time. She protects her family friends and pack. She loves to Hunt fight track and speed
*Desired Rank: Beta
*Desired Position: Beta
*Can you apply to all of the pack's rules: yes
Wolf Family: (siblings, parents, etc.) Brother Sage
Wolf History: to be announced
Wolf Reference: (image)
Alpha Female
Top

*Wolf Name: Milah
*Wolf Gender: Female
*Wolf Age: 3 years
*Appearance: Mixed fur, light brown eyes, medium height
*Personality: Brave, agile, maternal, loving, strict and optimistic
*Desired Rank: Beta
*Desired Position: Hunter
*Can you apply to all of the pack's rules: Yes!
Wolf Family: Emma (deceased mother), Vincent (deceased father), Kuma (sick younger brother), Mary (deceased older sister)
Wolf History: I lived with my family in a quiet forest, everything was perfect. I took care of my younger brother and my older sister took care of us. As usual, my parents went hunting and we were taking care of home, but that day was not going to be business as usual. While we played we noticed that something was wrong, an ambush! The wolves came out from everywhere to surround ourselves, we fight until Mary died, I fled with my younger brother as far as possible, and my brother became ill. On our way we found the dead bodies of their parents, this is not going to be so ...
Wolf Reference: