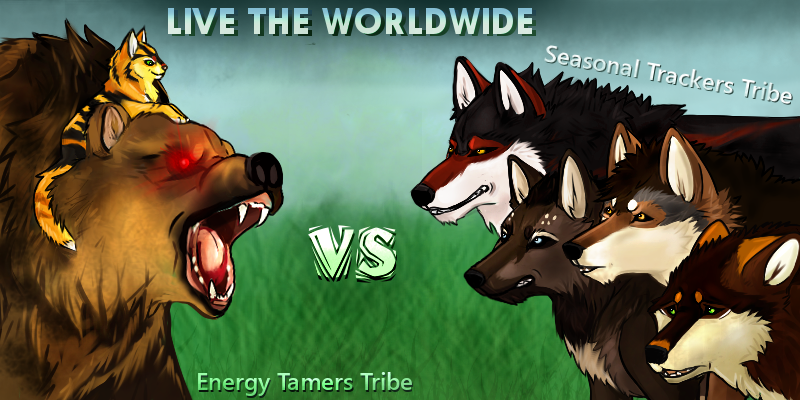 More info of current state of the RP in the spoiler below!
Spoiler
Show
Live The Worldwide is a parallel world full of mysteries and secrets. Its inhabitants hold many different beliefs, worshiping different deities which each have a fundamental role in maintaining the balance of the world. These different beliefs lead to conflicts, with some tribes fighting for dominance and others simply wishing to peacefully serve and worship their deities.

Ancient legends tell of the forces of light and dark struggling against one another, battling each other for dominion since the dawn of time. The 12 Spirits of the Lights are admired and praised by the wolves who formed the famous Seasonal Trackers Tribe. The tribe’s reverence has strengthened them, their power growing immensely as the wolves serve them, and thus they have dominated the land, spreading their light and granting the tribe great fortune.

But now an unexpected threat has emerged, jeopardizing the peace and prosperity the Seasonal Trackers Tribe has worked to achieve. They call themselves the Energy Tamers Tribe, a group of cats that has surpassed nature’s limits. They have made a pact with the 13th spirit, Sucki the Spirit of Darkness. Using their mastery of the five elements, they work to fulfill his dark ambitions and aid him in his quest to destroy the lights and shroud the world in his shadow. In return, he has granted them the power of possession, allowing the cats to control other creatures and bend them to their will.

What has changed for STP?
- Active RP, with more events and action to keep things rolling!
- Individual topics for individual plots are possible now!
- New system of trade of items instead of use of wealth
- Wider span to our Territory with brand new RP Places!
- Enemy and Ally groups available for users to create! (See the forum for details)
- New RP Map -> http://live-the-worldwide.foroactivo.com/h9-rp-map

Yeah! The new thread is up! The colors looks nice Strong! Thanks Kamaji for putting the base together!

The contest voting is open so go cast your votes!

WQ Username: AcreWoods
Wolf Name: Brielle
Age: 2 1/2 years
Gender: Female
History: (Kinda long ^^) Brielle was born into a peaceful pack living along a river. In this pack, ranks were passed down, generation after generation. The rank of one's parents is the rank one must take. Brielle's family were healers.However, she had no interest in the art of healing. From a young age, she was in awe of the hunters. Her parents noticed this infatuation that began, but hoped for it to be a phase. The alpha of the pack was worried about this obsession Brielle had. Being a young pup, there was still time for her to change. He warned her parents and reminded them of a pack law: Any wolf who went against their rank was to leave.
The older Brielle got, the more she longed to be like those hunter wolves. Her parents had no choice but to keep her in the den, only sending her out for short errands. They taught her to keep her thoughts to herself and speak only when necessary.As Brielle grew, she became hard to contain. She would often go off to "gather herbs" for her parents, practicing her hunting skills in the forests. Brielle's skills developed as she realized her true calling and natural talent.
During one of her wanderings, the beta male came across her stalking a young deer, seeing her great skill. He recognized her though as part of the healer clan. Doing his duty, the beta reported to the alpha male. The alpha male, though not an unkind or harsh individual, had no choice but to follow the pack laws and traditions. Brielle was asked to leave the pack immediately. She now looks for a new group to become a part of.
Reason for Joining: I have not RPed in a very long time and sincerely miss it! You guys look like a put together, active group. I like that!
Activity Level(1/10): 7 until summer, then an 8-10
Were you a part of the old STP?: No I was not!
Join As (Newcomer, Minor..): Newcomer please!
Avvie- Wolfach <3333
Top

Awesome, it's up! The colors are so...There are no words. Great job, Strong!
Thank you Moonshine

Here is the link to the voting topic, in case anyone asks.
http://live-the-worldwide.foroactivo.co ... ong-of-ltw
I should mention that the member count needs to be updated since we have grown a bit since the base of the thread was created

I don't know if the titles of things could be centered anymore than they are. This is just me haha, giving some feedback.

Brielle, your form is ACCEPTED! Go ahead and register on the site and I will activate your account shortly

Welcome to LTW!
(We accept things on the site, so I will assume we can do this here too. Strong, inform me if I'm wrong!)

Hey! Brielle! Welcome to LTW! I just activated your account!

PS: Of course Kama.. all the council members are allowed to accept and activate users! =P
● Leader of STT - RP Wolf Group of Live The Worldwide: Our WQ Thread!

Welcome to the pack Brielle! We hope you enjoy your stay!

WQ Username:AngelSTP
Wolf Name:Angel
Age4 years old:
Gender:female
History:when Angel was a pup she was the runt in the litter her brother and sister always picked on her for being the runt but she didn't really care her mom became worried that if they kept teasing her she would just give up on life so she made her father take her out hunting and when her father took her hunting he sat her in a hollow tree log with holes in it so she could see while he was hunting when Angel became a teen she kept practicing her hunting and getting her dad to show her more techniques after a couple of weaks Angels father went on a hunt with her father they In countered a bear her dad thought he could take it on Angel tried to talk him out of it but nothing would work so her father went and faced the bear after two swipes the bear killed her father when the bear ran off Angel went up to her father and nudged him when she found out that he was dead she rushed home to tell her mother and brothers after her father passed she told her mother that she was setting off to find a pack.
Reason for Joining:I was apart if the pack so I decided I'd join the New WQ thread!
Activity Level(1/10)10:
Were you a part of the old STP?:yes I was!
Join As (Newcomer, Minor..):newcomer
*Newcomer of LTW*
Top

Lols, you didn't need to post this here, Angel, seeing as your already with us as a member haha. Aside from that you are ACCEPTED! Welcome to LTW

Strong, that avvie is so beautiful! Thanks for the confirmation as well.
There is a slight possibility that I may change my username here on WQ, but I am not sure. I want to change it to Kamaji, as it hasn't been taken...Yet, but I am so unsure. What do you guys think? I could use some opinions.
Top

The Rp is coming along nicely! Thanks to everyone helping out!

Sorry my absence over the weekend, I have been going out of town every weekend, so this is just a heads up.

WQ Username: Outcri
Wolf Name: Vihn
Age: 2 1/2 years old
Gender: male
History: Working on it >.<
Reason for Joining: You guys look like a fun and kind group and I hope I can make some new friends and RP. o v o
Activity Level(1/10): 8-9ish
Were you a part of the old STP?: Nope
Join As (Newcomer, Minor..): Newcomer o v o/
Top

Outcri wrote:WQ Username: Outcri
Wolf Name: Vihn
Age: 2 1/2 years old
Gender: male
History: Working on it >.<
Reason for Joining: You guys look like a fun and kind group and I hope I can make some new friends and RP. o v o
Activity Level(1/10): 8-9ish
Were you a part of the old STP?: Nope
Join As (Newcomer, Minor..): Newcomer o v o/

Vihn ,you are accepted!

Just register on the site and I will activate your account. Welcome to the pack!
Shiny
Avatar © Lord-Pinkerton@deviantart.com
Top

Thank you for letting me join! I've signed up for the site. (:
Top

I will also announce the members who have joined Via the web and not through WQ, if I may.

Be sure to welcome Luna to Lives the Worldwide as well!
(Hopefully that no one we know already...XD)
Top

Welcome to the Family! Luna and Vihn!

Thanks! I put all my effort on it! And well, I am changing a bit my style! Improving

Oh And I think that you should change username to Kamaji, and.. "member count needs to be updated" <- Which is the new number? (How you count it?) "I don't know if the titles of things could be centered anymore than they are" <-I just did it! Is better now?

Oh, and I am back from my EFA!

● Leader of STT - RP Wolf Group of Live The Worldwide: Our WQ Thread!