There lies a land with a beautiful eastern forestland that is rich with prey and has a big sparkling river that goes through the forest, across the central plains and all the way past the western mountains, starting with a waterfall in the forest clearing. Humans have stepped on the land, but the animals have only seen two humans set foot on the land, and there hasn't been any humans for generations after that. Wolves rule the land, in which we call Kythadar.
Me and my pack have settled in a big clearing in the Eastern Forestland, we have worked hard in getting the area to fit for a pack, and we now live in the forests. we travel as far as the Northern Slopes, or even as far as the Western Mountains, to hunt for the pack. We called ourselves "The Pack of Raging Fire." Will you join us?

We are a semi-realistic roleplay, meaning you can have some unrealistic physical appearances or traits (read the pack's rules to see what is allowed and what is not). We currently do not have an ongoing plot after the settling of the pack, but i hope to come up with a plot soon. We also have a website that will be coming very soon!


The pack is a group of close-knit members that create a fun environment for all. We mainly focus on roleplaying here, but have many other fun options when joined- including contests, chats, and games. Each and every member gained in Stipant Elementorum is not just another pack mate, but a new friend. We would love it if you considered joining our pack as either a full member, pack friend, or an ally. Thank you for checking out our pack!

by BlueBellTigger
☾✦✦✦❄◊✦✦✦◊❄✦✦✦☽
☾◊✦❄Silver Peaks Pack❄✦◊☽
☾✦✦✦❄◊✦✦✦◊❄✦✦✦☽
Long, long ago... There were mountains that surrounded a valley. It was a lovely valley, there was a lake in the middle with forests and grassy plains. It was bountiful with food and shelter, one night a pair of young wolves stumbled across this gorgeous valley. They made it their home... Over the years they grew into a strong pack of many wolves. Wolves all over came to this special place, the pack was peaceful, they loved to help wolves... Who ever needed their help came here, and if they found what they needed in their lives. They would set off to find their own homes, the Silver Peaks mountains were amazing. In the night, the moon will gaze and make it shimmer. The sun would make them crystal silver, it was not hard to find the tops of the Silver Peaks. That's why it is so valuable...Also, there is a foe in the land, it is a mysterious foe. It is a pack of hatred and horror, for they will tear the land and claim it... Kill any wolf who tries to stop them, they will do this until there is a strong pack to vanish the evil... The mountains now look gloomy and scarce of the shimmering light of the moon, the sun is now making the valley feel fear... This foe needs to be stopped... This foe is spreading its pack, for it takes this valley and others as well... For the Silver Peaks Pack has only one wolf who survived, can you help her defeat this retched evil? And help other packs homes come at peace? We need all the help and strength…
we need your help to stop the foe...

Re: Advertise Your Pack Here!

HI i want to join your pack plss but how?

Re: Advertise Your Pack Here!

HI i want to join your pack plss but how?

(1 That pack is old and probably dead.
(2 You need to look for packs in this forum -- not this thread -- to join.
(3 This thread is for advertising packs, only.

by valkea
WildLupin, your advertisement has been removed. In the future, make sure you include a link to your pack's WolfQuest thread. 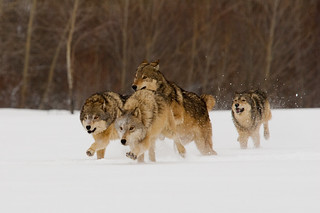 Rules | Thread | Social Arena | Info | Guides | Site | Portal | Q&A
This pack is trying to survive the most supposed
natural world events. After so many years, it was losing gradually
strong and intelligent members, who were able to change the lives
of all family members. Their deaths, was one of the saddest
of the pack. After many adventures they spent together, many
gave up and went their own way, leaving behind one of the most
important things in the world: The family. But a young wolf tries
to change this dark past, along with the few family members creates
a new pack, with a new name, a new story....

by BlueEverest
The Bloodrose Howlers is a sneaky pack that you'll always have to watch your pack when near or on their territory.They might seem scary but their very loyal wolves always sticking for each other;fighting back to back.They have an emeny, Starry Oasis Pack.There leaders have been enemies since before they've been born.Their parents had enemies so they are now finishing what their parents started.Will you help The Bloodrose Howlers defend themselves from Starry Oasis Pack?

by Kay White
Are you searching for great pack with lot of exploring, playing and having fun? Then wolf pack Mσση Ɓєαѕтѕ is best for you!

Join us on great adventure, that never ends!!!

∙∙∙∙∙·▫▫ᵒᴼᵒ▫ₒₒ▫ᵒᴼᵒ▫ₒₒ▫ᵒᴼᵒ
➳ Hello, newcomer.
Do you think you ready to take on a new kind of challenge?
This pack has been broken down many times, but it has always been built back up only by the wolves who were crazy enough to believe in it; But now Creekside Shadow faces the biggest challenge it has ever faced. Will you help this pack in need?
Wolf quest thread:http://www.wolfquest.org/bb/viewtopic.php?f=50&t=78052

We currently only have two members, so please consider joining!

by Jadeseeker
If you love stories, a great way to show it would be to join one of the five Packs of the Yellowstone Valley!
There are currently nine packs to choose from, with the tenth coming soon: Diamond, Emerald, Ruby, Amethyst, Tourmaline, Onyx, Opal, Jade, and Gold. Each one is special in its own unique way, and each one guards territory in a large region of the Yellowstone Valley. You could also be a lone wolf!
And not only do you get the fun experience of being in a pack, your wolf will be incorporated into a book series I am writing*, True Calling, and possibly put in as a major character!**
Read the requirements and see if you want to join! Thanks!

*If you want
**If I am interested in your character enough

When Arthur was born, We were there,
When he pulled Excalibur from the stone, We were there,
When Mordred betrayed his father, We were there,
When the Battle of Camelot began, The Wolves were There
© fiftyshadesoffluff/Zamber
Hᴀʟᴛ, Sᴛʀᴀɴɢᴇʀ! Wʜᴏ ʙᴇ ʏᴇ?
Welcome to my thread! I am Queen Zamber, the founder of the pack you will soon read information about. Before we get to the pack stuff, I want to tell you exactly what you're getting yourself into. One, this is a friendly community here, so all is welcome! Two, this pack is unrealistic with certain limits, but otherwise free of charge XD. Three, did you know you walked through the gates of Camelot just now? You thought there was some serious information in those three points up there, didn't you? Gotcha! Perhaps the first two and a half were kind of important, but let's move on, shall we?

Round Table Knights-RTK-is a wolf RP composing of three packs called Houses: The House of Arthur, The House of Merlin, and The House of Mordred. Each House has their very own duties to differentiate each house from one another even though they live under the same roof. They are seldom their own virtues, and values but with the same goals as an entire pack. In which case that goal is: Gain the Most virtues and Successfully defeat Cronos to save RTK from the end of the world. They also have the same ranks, but with their very own crest to identify them.

Have you gotten a hint on the theme yet? No? Allow me to explain! Think of RTK as a time when King Arthur lived. We aren't werewolves of course, just your average wolf on four legs with a bit more knowledge than the normal circumstances would allow.

Please take some time to view our WQ Thread to read more about us. Visit our Site for extensive information and site applications if you don't have a WQ account. Hope to see you join us!